The Pitcairn Island post office is opened for a period of time on Sundays, Tuesdays, Thursdays and before the arrival of ships enroute to New Zealand and after the departure of ships that deliver mail to the island. 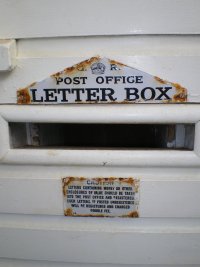 Until 1926, letters from Pitcairn franked ‘Posted on Pitcairn Island: no stamps available’ were delivered free of charge in New Zealand and elsewhere. For the next 14 years New Zealand stamps and rates were used, and on October 15, 1940, the first Pitcairn Island postage stamps, consisting of eight denominations, were issued. In 1941 a small post office was built in the Square of Adamstown and the amount of mail increased significantly. In 1957 the island’s first postmaster, Mr. Roy Clark, discussed the need for a larger post office, and in the early 1960s a new post office was built.

Mail to and from the island is sent via New Zealand and can take several months before it is delivered. The supply ships, which depart from New Zealand, deliver mail to the island at least three times a year and ships passing Pitcairn enroute to New Zealand are sometimes willing to collect mail and carry it to Auckland.

[From Guide to Pitcairn, 1999 Edition, Published by the Government of The Islands of Pitcairn, Henderson, Ducie and Oeno.]